Every year, there are two events that strike FOMO into the hearts of Portlanders more than any other: FEAST and Portland Cocktail Week. While I found myself stuck at home this year during FEAST, bitterly refreshing my Instagram feed and wishing I was eating #allofthemeats, I was lucky enough to score a Festival Pass for this year’s Portland Cocktail Week – a six day bacchanal of #allofthebooze, #allofthecocktails, and, ironically enough, #allofthemeats.

For the uninitiated, Portland Cocktail Week (often abbreviated PDXCW) is week-long celebration of the art and craft of cocktail-making, and it draws bartenders, bar managers and industry reps from across the nation. By day, they attend the Bar Institute, which features courses in mixology, hospitality, and other aspects of modern bar management. By night, they throw some seriously epic parties. For festival pass holders (members of the press, local members of the industry, and the ever-nebulous “cocktail enthusiasts”), it’s usually less about the courses and more about the parties.

This reporting business is a tough job, but I’m doing it for you, dear reader.

This was my first (and hopefully not last) year covering PDXCW. Although there was no way you could possibly attend all of the parties (there were often at least five or six events a night), I did manage to attend seven events over the course of the week, which was about all my liver could handle. Rather than regale you with painstaking detail about each of these events, I’ve set down a few impressions and things I learned over the course of the week:
1. There Are Things You Won’t Know
I’ve always considered myself to be something of a bon vivant in general and a bit of a cocktail aficionado in particular. However, as I quickly learned at PDXCW, in the grand scheme of things, I don’t know jack. Although many of the major parties are sponsored by well-known liquor brands (Bacardi, Crown Royal, etc.), these people at these parties are operating on a different level, and many of the vendors are, as well. Many of these people have flown cross country to spend their afternoons talking about pharmacology and locally-sourced ingredients. If you’re one of these people, good for you. If you’re not, don’t sweat it – it’s still fun, and you just might learn something.
I, for one, definitely fall in the latter category. Midway through the festival, I attended “An Evening on WhistlePig Farm,” where the rye flowed freely and so did the praise. I thought they had a solid product, but I assumed it was an entry-level spirit, especially since the next item on the agenda was a party sponsored by Crown Royal. I maintained this view right up until the point where I happened to spy the price-tag on a bottle of WhistlePig at the local liquor store and proceeded to immediately soil myself in shock: the only WhistlePig available in Oregon currently goes for $86 a bottle.

This shot cost a million dollars.

2. Plan Ahead
As I mentioned, there are a truly overwhelming number of events to choose from. Being as I have both a day job and a strenuous concert-going calendar to keep up with, I wasn’t able to attend as many events as I would’ve liked. (To the people who invited me to the boozy brunch and soccer match? One day, my friends. One day.) If I could do one thing differently, I would’ve spent more time planning my schedule and researching the brands I wanted to check out.
3. It’s About the Food, Too
Portland is obviously as much of a food town as it is an alcohol town – I don’t think that’s news to anyone. What did come as a bit of a surprise to me is that you spend as much time eating at these things as you do drinking. At the Imbibe Magazine’s “Swig n’ Swine” event on Sunday and Crown Royal’s “Feast Like a King” on Tuesday, there were massive, delicious spreads to choose from – Clyde Common in particular had impressive showings at both events. Even at the less overtly food-centric events, such as Appleton Estates’ “Big Up” party on the last night, there were a near-constant stream of appetizers to try. I should know – I gained about 80 pounds that week.
4. But Who Are We Kidding – It’s About the Booze
Unless you pledged a fraternity or have a serious drinking problem, it would be very easy to consume more alcohol than you’ve ever consumed in your life at PDXCW. With everything from boozy snow-cones (House Spirits 10th Birthday Party) to a dozen garbage cans filled with punch (Swig n’ Swine) the supply of booze was never ending – and somewhat overwhelming, at times. Moderation, as in many facets of life, is key.
There were two things that surprised me about the liquor at Portland Cocktail Week. One was the prevalence of mainstream spirits. Almost all of the parties were sponsored by well-known brands such as Crown Royal, Bacardi, Hennessy and Appleton Estates. While it’s in no way surprising that Diageo, Bacardi and LVMH have deep enough pockets to fund these events, PDXCW made me realise just how reliant we are on our boutique spirits, in Portland. When I order a cocktail at a place like Tilt or Interurban, it’s almost always built around Oregon liquors. To see so many seriously minded bartenders downing “mainstream” booze took a little getting used to. 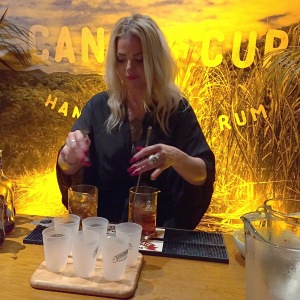 At the Appleton Estates party.

What surprised me more, though – and what was perhaps my only real complaint about Portland Cocktail Week – was how sweet everything was. Almost every cocktail I sampled was laden with simple syrups, juices, and liqueurs. Cocktails, punch, boozy gelato – you name, they had it, and most of them packed enough sugar to send you into hyperglycemic shock. It gets a little old, after a while. When I was at the House Spirits Anniversary Party, I would’ve killed for an Aviation Gin martini, but instead, I had to “make do” with a snow-cone and about eight kinds of punch.
5. It’s Great Fun
Despite the weight gain, the probable liver damage and potential risk of diabetes, Portland Cocktail Week was a crazy, amazing experience, and one that I hope to repeat next year. Mark your calendars, folks – PDXCW 2015 has been announced for October 17-23, 2015.
Stay sharp, Portland.

One thought on “Five Things I Learned at Portland Cocktail Week”