October 14, 2014October 25, 2014 • Yume
Every couple of years, Apple cooks up a new form factor for their phones. This decision has a profound impact on two types of people (aside from Foxconn employees): erstwhile early adopters such as myself and the case manufacturers that cater to them.
Not being one for suffixes, over the last few years I’ve cycled through the iPhone 4, the iPhone 5, and now the iPhone 6. In previous years, there was a dearth of cases in the weeks following an iPhone launch, as casemakers struggled to retool their offerings and get new products on the market. This year, however, there were a surprising number of options available out the gate or shortly thereafter. Being from Portland, where we’re all about that hipster ish, when I started shopping for an iPhone case, my thoughts immediately went to fashion’s most Next Level textile: Leather.
I had dabbled with leather cases once before, and I had gotten burned. Not long after the iPhone 5 came out, I purchased a soft leather case online – and while I liked the color and texture, it was bulky and poorly made. As it turned out, the leather portion of the case was a thin veneer attached to a plastic shell – a fact that became readily apparent as the veneer started to separate from the case after a month or two of use. Chagrined, I set my molting case aside and returned to the cold, hard embrace of impact-resistant plastics.
Two years later, though, and I had begun to feel the siren call of the leather case once more. While I waited for my iPhone 6 to arrive, I found myself eyeing some of the leather cases on the market; frequently despairing at both the high prices (several of the cases I looked at were in the $50-$100 range) and the preponderance of boxy, wallet-like cases that completely hid the 6’s svelte form. So when German case manufacturers KAVAJ offered to send me one of their leather cases for review, I jumped at the opportunity.

He said, “It was my pleasure,” / I said “Don’t touch my leather” – Action Bronson

KAVAJ makes three cases in two colour options (black and cognac) for both the iPhone 6 and the iPhone 6 Plus. For this article, they sent me one of their Tokyo cases in cognac. The case came wrapped in colour-coordinated tissue paper and a plastic sleeve. 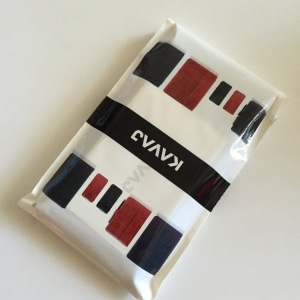 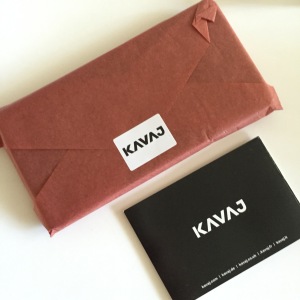 Out of the packaging, the Tokyo case has a sleek, streamlined profile. Made out of hard leather, the lack of a plastic shell allows the case to be almost as light and thin as the iPhone 6 itself – even the two credit card pockets on the back lie almost flush with the rest of the case. Cut-outs on each side allow for easy access to the phones buttons and ports, and the cut-out on the back of the case is just deep enough to make sure that the 6’s often-maligned lens protrusion is no longer a consideration. 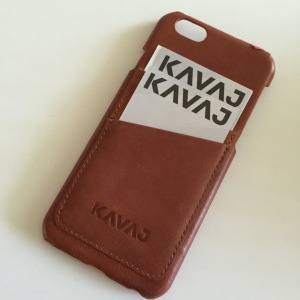 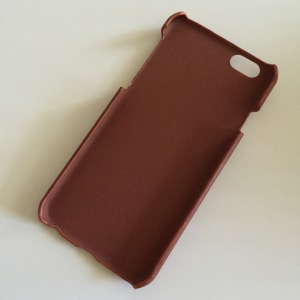 In terms of appearance, the cognac case comes in a rich, dark brown with same-colour stitching and the KAVAJ logo embossed on the back. It’s all very handsome. And let’s not forget – there’s that sweet, sweet leather smell.
FUNCTION
The first thing you notice when you snap on the Tokyo is that the fit is very, very tight. Once it’s on, it fits great, but it’s not the sort of case you’d want to slip on and off on the regular. Which is fine, because if you’re like me, you won’t really feel any need to swap it out for anything else. (Unless you’re going to a PETA meeting or something.) The lightness of the case makes you almost forget it’s there, but it adds just enough grip and thickness to make the 6 much more comfortable to hold. (The first few days I had my 6, I was subject to constant paranoia that it was going to slip out of my fingers, especially when holding it in landscape orientation or when taking a photo. This definitely wasn’t a consideration once the Tokyo was in place.)
Th 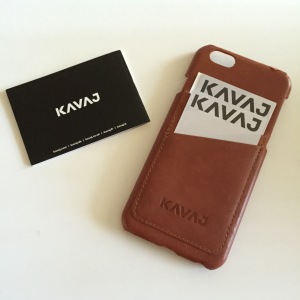 e two credit card / ID slots on the back of the case offer an equally tight – but usable – fit. Personally, I’ve never been a huge fan of the wallet/case idea, because it seems like a really great way to lose both your phone and your wallet in one fell swoop, but if that’s your thing, the Tokyo can definitely handle your ID and debit card for a night on the town. I also found that even more so than credit cards, the slots were ideally suited for holding business cards – making it the perfect wingman for those moments of spontaneous networking.
After a week of use, the case had begun to develop a gentle and dignified patina, but it showed nary a hint of the shedding or peeling that I had noticed with other leather cases. Although I didn’t perform any drop tests or actually try to scratch the case (Why not, you ask? Well, lemme borrow your iPhone 6 and we can turn this into an episode of “Will It Blend?”, but until then…), it seemed to hold up fairly well to the rigors of my busy schedule. It also held up to the scrutiny of my friends – drawing more comments and compliments than any other case I’ve seen on the field in recent memory.
VERDICT
The KAVAJ Toyko is an attractive, lightweight case and a solid choice for anyone who likes the look of leather. At $24.90 on Amazon, it’s also supremely affordable, especially in comparison with its competitors. Want one for yourself? You can buy one here