So my more astute readers might have noticed that our our live coverage of MusicFestNW last week ended rather abruptly after the first two days. Now, a little over a week later, I can tell you why.

In the wake of my article on Portland’s 94 Cent Phenomena back in June, I had talked casually with the powers-that-be at 94/7 KNRK about the possibility of writing a live blog music for them. On Thursday of MFNW, I met with 94/7 and agreed to a new “volunteer” gig as the Live Music Blogger for KNRK. (Obviously, this negated the utility of PrentiousPDX’s own MFNW Live Music Blog, which is why we didn’t return to the blogosphere on Thursday night.) 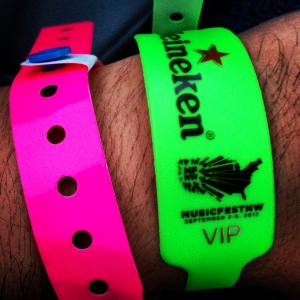 Thought I’d give this layering business a try.

My first assignment was to trade in my standard-access MFNW wristband for an all-accces/VIP wristband and accompanying press wristband and head downtown to cover Young The Giant’s headliner show in Pioneer Courthouse Square – which, as it turned out, was in the middle of a huge rainstorm (at first, I thought this was perhaps KNRK’s way of hazing the new guy). The following week has been a whirlwind of concerts, club shows, and article drafts. I saw over a dozen acts at MusicFestNW, scrambled through press pits, attended Grouplove’s sold-out show at The Star Theater, and churned out five articles. 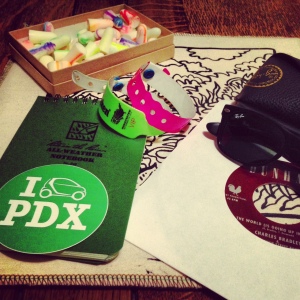 The detritus of MusicFestNW… and a great life.

Want to see what we’re saying for 94/7? Check out their new live music blog, Thoughts From Last Night, here.

So what does this mean for PretentiousPDX? Well, obviously, you won’t see much coverage of Portland’s live music scene on this blog, anymore. And while we haven’t been known for our frequent posting schedule, it’s likely that the articles will be a little bit more sporadic. However, we’re committed to continuing to blog about pop culture and Portland living, whenever we get a spare moment. And you can continue to follow us on Twitter and Instagram.

When I was in high school, I saw the movie High Fidelity, and it changed my life – for the first time, I realised that there were people out there who were just as obsessed with music & pop culture as I was… and when, not long after, I read a Chuck Klosterman article in SPIN, I realised that some people actually not only live this way – they get to write about it, too. So when I was given this opportunity, I jumped on it.

I love music. This is what I do. And this is a dream come true for me.
Stay sharp, Portland.

One thought on “Thoughts From Last Night: PretentiousPDX’S New Gig”