(For background on why I embarked on this madness, please read Part I)

I could put it off no longer. The Nickelback Challenge had begun. I cracked open my first bottle of Kokanee and got to work.


(A little video I recorded at the start of the evening for the sake of posterity.)

I initially tried to liveblog the challenge, until I realised that writing “This song sucks. The last song sucked, too” for seven hours straight was likely to make an already tedious process even worse… not to mention risk turning me into that dude from The Shining – but I did manage to commit quite a bit to writing before the tedium wore me down. (If I change tenses throughout this narrative, that’s why.) 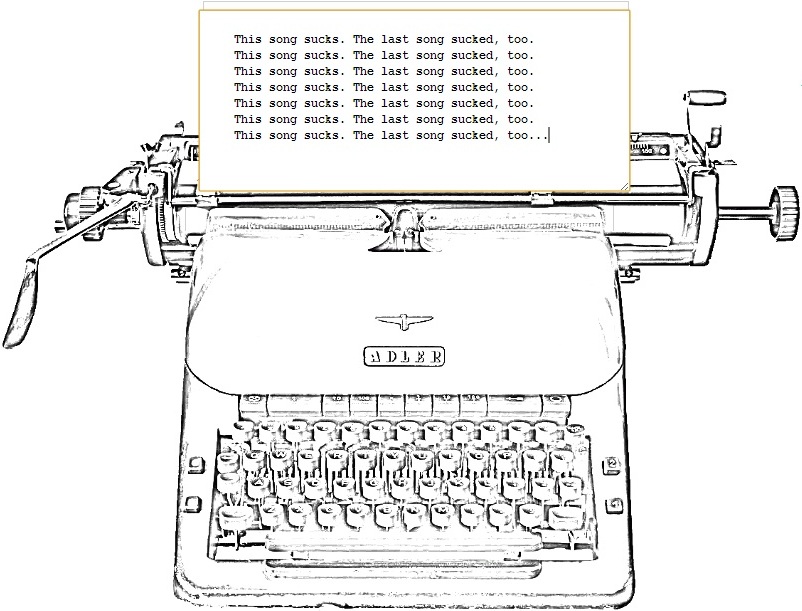 It’s also worth noting that a great many of these songs are available on YouTube thanks to the perseverance (and rather ambivalent attitude towards copyright laws) of a guy who goes by the handle “nickelbackrocks87” and several other pro-Nickelback souls, so I suppose I should thank him and his kind for making this video possible. I’ll pray for your souls, my children.

So, let’s start at the beginning, shall we? 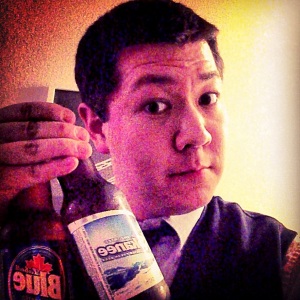 I’m halfway through the first track (“Little Friend”) off of Nickelback’s 1996 debut album, Curb. After two minutes of Chad Kroeger, I’m thinking I might actually survive this evening. Although Chad’s voice is already getting tiresome, this song is no worse than a Pearl Jam B-Side (which, as you may remember, PJ was already kind enough to give us in spades).

According to Wikipedia (I couldn’t find a corroborating source, but to be honest, I didn’t try all that hard), Curb was named after a deceased friend named Curby, who had been killed in a car accident. The original cover art for the album was allegedly a picture of the crushed car that the album’s namesake died in. Pretty dark stuff, kids!

“Pusher” is another largely forgettable mid-nineties angst-rock ditty (this early on, I was still deluded enough to think that’d be able to write about every song on every album), but “Detangler” manages to be mildly catchy, although it seemingly has nothing to do with hair care products, much to my disappointment. Chad used to rock quite the mane, so would it be too much to hope for a song about hair care? I think not.

While listening to the album’s title track, I realise that nickelbackrocks87, in addition to posting these sonic masterpieces on YouTube, has also taken the time to make them into karaoke-style lyric videos. This kid’s commitment to awfulness is impressive.

Continuing on, the intro to “Where?” (the question mark seems excessive) appears to have stolen a guitar riff from The Beatles, but maybe that’s just the Kokanee talking. “Falls Back On” and “Sea Groove” are also pretty forgettable. All of these songs seem like they could’ve been written by your friend’s older brother – you know, the one who always wore flannel when you were in middle school and said he was in a band. (N.B. If you were born after 1990, this reference will probably make no sense to you. Ask your parents.)

Having hit the homestretch on Curb, I’m finally treated to Nickelback’s first music video, which was recorded for the song “Fly” (not to be confused with that much more widelyknown but equally shitty song by Sugar Ray). It’s disappointingly uninteresting, save for the fact that it features a lot of dramatically lit close-ups of Chad’s face. The rest of the album is pretty boring. Nothing terrible (although “Window Shopper” is pretty bad), but nothing remotely redeeming, either.

While The State is stylistically quite similar to Curb, its first track, Breathe – manages to simultaneously set a more metal and a more “emotional” (read: whiny) tone for the album. If Emo Metal were to become a thing, this album would finally have a home.

The State does boast the first track that any normal people might recognize. Some of you will probably remember “Leader of Men” as being Nickelback’s second single to receive widespread airplay – following the success of “How You Remind Me,” this little gem was dusted off and rereleased as a follow-up single. (It speaks volumes that apparently there were no other single-worthy tracks on Silver Side Up, so they had to regurgitate this song, instead – but I’m getting ahead of myself.) “Leader of Men” is not amazing by any means, but it’s not terrible.

Later in the album, we encounter the song called “Diggin’ This,” where Chad complains in the lyrics, “I’m not really diggin’ this!” Guess what, Chad – neither do we. The album wraps up with some rather dubious Christian imagery – in “Not Leavin’ Yet,” Chad talks invokes (or profanes, I’m not sure which) my homeboy J.C. and talks about a “Rosary round a crown of thorns” – which, as a practicing Catholic, I can tell you is not the most efficient way to pray the Rosary.

I have to listen to HOW MANY albums? Damnit.

Nickelback’s first commercially successful album starts out with “Never Again,” a cheerful little ditty about domestic abuse, which is inexplicably followed up by the Chad’s commercial Mangum Opus, “How You Remind Me.” This is the song that started it all – and by extension, it’s the song that’s also directly responsible for bringing hours of countless misery to hipsters around the world who’ve had the misfortune to be exposed to Nickelback on Top 40 Radio “at work” (or in the car, when they’re trying to get a quick Rihanna fix in) or at that one club that they allegedly go to be ironic (which is code for checking out the non-hipster ladies who frequent such establishments).

Now, many of you will claim that you’ve hated Nickelback from the get-go, but for those of you revisionist historians out there, lemme jog your memory – this song was hugely popular in 2001, despite the fact that the music video for it was absolutely ridiculous. Let’s consider the facts, for a moment – the combined sales for “How You Remind Me” as a single and Silver Side Up as an album top out at over 11 million – which is probably more people than have ever even heard of a band like, say, Ra-Ra-Riot, let alone purchased their music. “How You Remind Me” was the number 1 song on the Billboard Hot 100 for the entire year of 2002, and it was the number 1 song for THE ENTIRE DECADE on the Modern Rock Charts. So you can tell that cute bartender who’s fixing your artisan cocktails that you’ve hated Nickelback for years, but let’s be honest – a lot of you assholes were probably rocking out to this jam at some point, in your life. And you know what? That’s ok. As the expression goes, even a blind hog finds an acorn now and then. To their credit, Nickelback managed to churn out one song that was commercially successful… probably by virtue of the fact that it sounds NOTHING LIKE ANY OF THEIR OTHER SONGS.

These signs must be everywhere in Nickelback’s town.
(Sign made at Dangersigngenerator.com – yeah, that’s a real thing.)

The great thing about Silver Side Up, though, is that in addition to the pop culture juggernaut that is “How You Remind Me,” it boasts a couple other easily mockable songs. One of the most notable of these is “Too Bad” – which probably should’ve been renamed “Too Bad, So Sad” – which is another angsty Chad K masterpiece about the pain of growing up in a single-parent household. The music video is especially awesome because the main character manages to drive the same beat-up K-Car for ten years straight (which, if you’ve ever driven a K-car, you’d recognize as being no mean feat), and the video’s major emotional climax comes when the son gets into a car accident because he has what I can only describe as a flash-back laden hissy-fit driving. Cinema at its best, right there.

Also on Silver Side Up: a song called “Hangnail” – and having done both, I can tell you that I’d actually rather have a hangnail than listen to this album, again.

And rounding out the experience, we have a little ditty that you may have tried to forget called “Hero” – which was apparently written for the first Spiderman movie. Looking back, this should’ve been a clear sign that the franchise was doomed. Can you imagine Christopher Nolan using “Rockstar” as the theme song for The Dark Knight? Exactly.

Two of the first tracks on The Long Road are “Do This Anymore” and “Someday” – which, in addition to being back to back on the record, have pretty much the exact same melody – or at least the same transitional bridge. “Someday” got a lot of airplay because it had a more emotional bent and dealt with feelings and shit, marking Nickelback’s transition from a band that wrote “Shitty Rock Music” to a band that wrote “Shitty Rock Music… For Chicks.” From here on out, all of Nickelback’s albums will feature songs where Chad talks about his feelings far more than any self-respecting rocker ever should.

Later, in the song “Feelin’ Way Too Damn Good” (again with the suffixes!), Chad muses that “somethings gotta go wrong, cause I’m feeling way too damn good.” Poetry at its highest form, right there. But Chad’s right – this is probably how all of his dates go until the girl actually listens to his music.

By the time I got to The Long Road, I was hurting, and all the Canadian beer in the world could not lessen my suffering. When I started the challenge, I assumed that my biggest difficulty would be making it through the evening without slitting my wrists or my ears bleeding. But in reality, the biggest challenge to listening to Nickelback is not how terrible they are (although that’s true, also) – it’s how boring they are. I have heard many bands that are less listenable than Nickelback, but never anyone as relentlessly banal and monotonous. All of their songs sound moreorless the same, and they’re all bad. By the time I made it to The Long Road, I was struggling to stay awake. When live-blogging failed, I tried a whole menagerie of things to keep me awake – I did sit-ups, I checked my Facebook relentlessly, I played Scrabble on my phone, I even tried playing Call of Duty with the sound off (and did surprisingly well, actually) – none of that could keep my boredom at bay. So, finally, after finishing the fourth album, I admitted defeat. Curling up in the fetal position by my computer, I resolved to continue the challenge in the morning and succumbed to sleep. The Nickelback Challenge had defeated me. But not for long.