(This post was initially supposed to go up a couple of weeks ago, but it took me quite some time to heal my psyche enough to finish writing this.)

I have done a great many things on behalf of PretentiousPDX. I’ve gone to concerts and music festivals; I’ve watched more Carly Rae Jepsen videos than I ever knew existed; I’ve Instagramed like a mofo; and I’ve stayed home on Friday nights to write while my friends hit up Dig-a-Pony and Secret Society without me. I even got on Twitter, which is something I swore I’d never do. All of these things in the name of blogging. After all – anything for your craft, right? Is it not a noble thing to make sacrifices for your art?

Well, if this metric holds true, then get ready to start erecting monuments in my honor, because I’ve taken such self-sacrificing behavior to its penultimate and (il)logical conclusion. That’s right. I completed The Nickelback Challenge. (Spoiler Alert: the actual challenge takes place in Parts II & III.) I have now listened to every Nickelback album ever released. In chronological order. I may never recover.

So why would I do something so masochistic, you ask? For Science!

A few months ago, Nickelback made national headlines when the reigning boss of Chi-Town, Rahm Emanuel, was forced to go on the record to clarify that he was not, in fact, a fan of the Alberta’s least favorite sons. This intrigued me – it’s fairly rare that anyone gives two shits about what kind of music politicians listen to, let alone what music they don’t. But Nickelback has become such a cultural lightning rod that implying that someone is a fan is now counted as an unconscionable slur. Fifty years ago, if you wanted to trash talk someone, you accused them of being Commie; now all you have to do is imply that Silver Side Up is their favorite album.

Very few bands have that kind of negative social currency, and that intrigues me. No band is dissed or trash-talked as frequently as Nickelback. No band engenders more scorn from hipsters and music lovers. Even within the confines of this blog, I’ve made derogatory references to them in almost a fifth of my articles. There are plenty of bands who are hated and forgotten – and I write about those bands, too. But to be hated year in and year out? That takes a certain type of talent (or lack there of).

So why do we hate Nickelback so much? What makes them stand head and shoulders (and golden mane) above the rest of the shitty bands out there? This was the puzzle that I meant to piece together.

Mindful of Sun Tzu’s admonition that one must know one’s enemy (granted, he was talking about influencing the fate of the Orient, not listening to Canadian pop music, but whatever), I decided that the only thing to do was to acquaint myself with Nickelback’s discography and see if they lived up to the criticism. 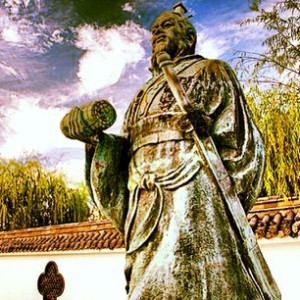 “All warfare is based on deception.
Also, Chad Kroeger blows.”

I knew from the start that this would be an arduous task. While we’ve been busy making fun of them, Nickelback has quietly amassed a dauntingly large body of work – seven (!) albums in all – each one more banal than the first. At approximately 45 minutes a throw, listening to the entire Nickelback discography was going to take a full afternoon or evening to get through – almost six hours of uninterrupted auditory abuse. Clearly I was going to need a lot of booze.

Since Nickelback hails from that great land to the North, I decided that it would be appropriate to drink exclusively Canadian beers while doing The Challenge, so I toured various grocery stores until I found one that traded in such “high-end” Canadian microbrews as Kokanee and Labatt.

Maybe if I drink all of these, I’ll forget what I’m about to do.

Once I had stockpiled enough beer to numb the pain of my task, the next step was to clear a swath of time on my calendar long enough to do the deed and deal with the inevitable hangover that was sure to follow. I eventually settled on a Friday night where I knew that I had no pressing commitments on Saturday. Friday eventually arrived, and with all the enthusiasm of a man going to the gallows, I set about laying the scene for my ordeal, which mainly involved making sure the beer was chilled and my laptop was powered on with a Google Chrome Incognito window up.

Why private browsing, you ask? Well, early in this process, I decided that there was no way I was going actually purchase a single Nickelback track, let alone an entire album, or *shudder* seven of them. Obviously, as a part-time hipster blogger, the thought of contributing to Nickelback’s royalty profits is as morally repugnant as cutting donation checks to Westboro Baptist Church or worse yet, buying non-Fair Trade coffee. The obvious solution was to see how much of this crap I could listen to on the internet for free… but given the tendency of modern browsers to tailor your search results and YouTube suggestions towards your search habits, I obviously didn’t want to start seeing pop-up ads for at-home perm kits or discount Kid Rock CDs. So I opted to keep my folly on the DL.

I don’t want my computer to judge me anymore than it already does.

Before I began, I listened to a couple of last, non-Nickelback tracks to center myself. Then, having laid the scene and steeled my nerves, it was time to start. I would suggest that you, dear reader, do the same. Quiet your mind, and when you’re ready, click ahead to read about the shitshow that followed.

One thought on “A Day Late and A Nickel Short, Part I: PretentiousPDX Tackles the Nickelback Challenge”