For many music fans, the onset of summer means one thing and one thing only: the start of “Festival Season”. For some, that entails trips to massive outdoor parties in remote locations for events such as Sasquatch, What The Festival or Paradiso. But for those of us with less vacation time on our hands (or a lesser capacity for recreational drug use), Festival Season has long been about “City Festivals”, like Portland’s MusicFestNW and the 94/7-sponsored PetAid or Seattle’s Bumbershoot.

When I started writing 94/7’s Live Music Blog, my very first assignment was to cover MusicFestNW 2013. For six days, I ping-ponged back and forth between venues all over the city. It was a slightly harrowing introduction to music journalism, but it was great fun – and it was awesome to be able to see a wide variety of acts at so many different venues. It felt like the entire city was participating.

I got to cover MusicFest again last year when they introduced their new two-day format at Waterfront Park, and while I had a grand old time, it was a very different experience. Tickets were fairly expensive, given the number of bands playing, and the consolidated schedule left out many of the smaller acts and local venues that had previously given MFNW that wonderfully eclectic feel.

And then Project Pabst rode into town on their magical unicorn steeds to save the day. Given Portland’s obsession with Pabst Blue Ribbon, the idea of them hosting a music festival in Portland (in collaboration with event promoter Superfly) was pretty much a stroke of genius. While Project Pabst’s main event follows a similar two-day pattern as MFNW (swapping out Waterfront Park for Zidell Yards), they have a wide variety of night shows scheduled at venues all over the city that give the festival a little bit more breadth and depth.

Typically, when I talk about PBR, I’m talking about a beer and a shot – but in this case, it’s more like a beer and an entire freakin’ musical festival.

There’s so much breadth and depth, in fact, that just pulling up the schedule can be a little daunting. But fear not, gentle reader – if you’re thinking about attending this year’s festival, we’ve created a guide for getting the most out of Project Pabst. I’ve pondered the lineup, scoured through show listings, watched countless YouTube videos and dredged up some seriously obscure Bandcamp profiles, all in the name of showing you the best this festival has to offer. (NB: These are just my recommendations, based on my own personal preferences. Please don’t send me angry emails saying “OMG WHY DIDN’T YOU INCLUDE -INSERT OBSCURE BAND NAME HERE- ON YOUR LIST?!?!” If you want to see the entire lineup, you can read it just like the rest of us.)

You’re seeing Brian Posehn at the Doug Fir Lounge, partially because that’s the only thing happening on Thursday, but more importantly, because he’s the only comedian you’ll see at any major festival in Portland, this summer. Bumbershoot has included comedy and other performing arts on their calendar for years, and it’s nice to finally see something similar in Portland.

If you want something a little soulful in your evening, head over to Portland’s newest venue, Revolution Hall, to catch Son Little and The Preservation Hall Jazz Band. Or, if you want to get your summer vibe on, go see Tacocat at Mississippi Studios – probably not the most serious band on the list by any means, but their brand of surf rock will probably fit the mood just right on (what I can only presume will be) a sweltering July night.

Project Pabst will kick into full swing on Saturday at Zidell Yards. On your way in, make sure to stop by the #PabstVan, grab a can of spray paint and indulge your inner tagger at their VANdalism exhibit.

Saturday will kick off with two of Portland’s favorite local bands: the increasingly ubiquitous Hustle & Drone and Priory, fresh off a national tour with Kaiser Chiefs. If you haven’t seen either band, you owe it to yourself to see both of them (and if you have, well… you were probably planning on going to this anyways). After getting a dose of local music, head over to the PBRcade, the onsite dive bar and arcade.

Typically, rap and hip hip are under-represented at music festivals, but if that’s your jam, make sure you catch Run The Jewels (Atlanta hip hop isn’t entirely my cup of tea, but these guys are pretty good). Saturday will close out with rock legends Blondie, which you definitely don’t want to miss – not only are they an icon, but they don’t make it to Portland very frequently. (Debbie Harry was in her thirties when she joined Blondie – so it’s pretty impressive that she’s still rocking out at 70.)

After hours, make some time to see Ghostface Killah and Del The Funky Homosapien at the Crystal Ballroom (the last hip hop act on the docket) or check the eclectic stylings of Fernando Viciconte at Doug Fir Lounge – think alt-country meets Tom Petty. (I’ve always wondered: why do music bloggers compare so many artists to Tom Petty? But maybe the real question is: why do so many artists sound like Tom Petty? Food for thought.)

Sunday (morning) is a day of rest. Go to church if that’s your thing, or grab brunch, but make sure you make it back to Project Pabst by one o’clock sharp to get another fix of local music. Portland rockers Wampire are probably one of the loudest bands in Portland – if you’re still dragging from the day (or night) before, they’ll make sure you get the cobwebs out. Which is a good thing, because I want you to be alert for Wild Ones, who are probably my favorite local band, right now. Danielle Sullivan’s lilting chanteuserie is not to be missed.

After Wild Ones, make sure you catch some of Terry & Louie’s retro pop-punk stylings, then head over to the on-site food carts for lunch. Then you have a choice to make. Like many festivals, Project Pabst is two-stage venue with staggered sets, so you can see a band on Stage A while they’re getting set up for the next show on Stage B. This is an ingenious setup, but it does pose a quandary when you’re talking about headliners. Do you ping-pong back and forth between stages, always hovering at the back of the crowd? Or do you pick a stage a stick with it, angling for the best possible crowd position?

Sunday on the Main Stage at Project Pabst, you’ll have Passion Pit followed by Weezer. On the B Stage, you’ll have Aimee Mann and Ted Leo’s The Both, followed by the Buzzcocks. I can’t imagine that anyone who’s a big Aimee fan is also a big Buzzcocks fan, so I think it’s really a question of whether or not you want to bounce back and forth or double-down on the Passion Pit/Weezer combo. I haven’t made this decision yet, myself, so you’re going to have chart your own course on this one. I CAN’T LIVE YOUR LIFE FOR YOU, OK?

Tix for Project Pabst are currently $40 for Saturday or Sunday and $75 for the the entire weekend. The club shows range from $8 – $22 each, plus service fees. All of these events are 21+, obviously. (If you’re surprised that a festival sponsored by a BEER COMPANY is 21 and over, then you obviously have never met the OLCC.)

The South Waterfront is not known for their abundant parking situation, so taking mass transit or biking are probably your best bets. (No word yet from Uber as to whether or not we can expect surge-pricing during the festival, but I think it’s a safe bet that supply will probably exceed demand.)

The Project Pabst folks have also made arrangements with the Portland Streetcar that anyone holding a festival pass can ride the Streetcar for free. While this is probably of limited utility to most people (I’m guessing that the majority of folks riding the Streetcar to Zidell Yards probably already have a monthly pass or will be coming from somewhere where they had to pay for TriMet anyways), but it’s a nice gesture all the same. If Project Pabst returns to Zidell next year, they’ll no doubt benefit immensely their proximity to Tilikum Crossing.

There’s also one more thing to see at Project Pabst that we haven’t mentioned, yet – PretentiousPDX! That’s right, after a seven month hiatus, I’m digging my notepad and my DUBS out of storage and hitting the concert circuit, again. We’ll be reporting live all weekend from Zidell Yards! If you’re not going, follow us on Twitter and Instagram so you can experience the FOMO in real time, and if you’re going (which we already established that you should), feel free to stop by and say hi, take a selfie, whatever. 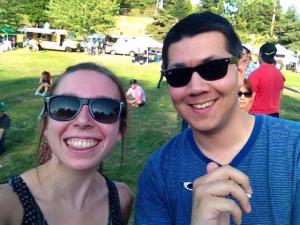 This could be you.

If you haven’t already, make sure you head over to their website and get your tickets today – as of this writing, both days are still available, but there’s no guarantee that they won’t sell out between now and then. Hope to see you there!

One thought on “PretentiousPDX’s Guide To Project Pabst 2015”