I don’t write about every band I see or every show I go to, because quite frankly, I see a lot of bands – some of which are more memorable than others (by my count, I’ve seen about 35 different acts, this year), and I’m a slow writer. However, periodically, I see an act (or acts, in this case) that are both good enough to warrant recognition in the hallowed annals of PretentiousPDX. and sufficiently beneath-the-radar that it would be relevant to talk about them.

About a week ago, I was still recovering from PetAid 2013 and planning on spending a quiet evening in… when I got a text from Jenna over at Wait And Scene, asking me if I wanted an extra ticket to a show that was starting in about 30 minutes. Obviously I took her up on her offer, because Hey, Free Ticket, but also because I give absolutely noneofthefucks and I’m fond of burning the candle at both ends.

“At PretentiousPDX, we talk about music the same way oenophiles talk about wine.”

After throwing on the most hipster-journalisty outfit I could find, I ran out the door and headed to McMenamin’s White Eagle Saloon in North Portland, one of the lesser-known gems in McMenamin’s real estate portfolio. (NB: Do not, under any circumstances, confuse the White Eagle with local bear-bar Eagle, which is also located in North Portland and caters to a rather different clientele. I made this mistake once. It was awkward.) I’ve only been to White Eagle once or twice, previously, but they’ve always had a reputation (in my own mind, at least) for booking talented bands that should, by all rights, be playing larger venues – but don’t/chose not to for whatever reason. This night proved to be no exception, with two very different but equally talented bands taking the stage, both of whom hailed from Chicago. (There was another band that opened, but I didn’t make it in time to hear their set, so screw those guys. Just kidding.)

Fun fact: The White Eagle was allegedly a brothel, once upon a time, and in addition to invoking something of a Bio Shock Infinite-style sensibility, their decor hearkens back to Portland’s seedier days. This has absolutely nothing to do with the bands in question, but it’s a cool spot.

My Gold Mask
I made it to The White Eagle just in time to catch the start of My Gold Mask’s set. Despite having to play to a paltry crowd of about 15 people, this Chicago-based trio brought their A-game, with fierce, haunting vocals and a polished sound that wouldn’t have sounded out of place at Crystal Ballroom (with good reason – as I type this, they’re opening for Metric at House of Blues in Chicago).

Lead singer Gretta Rochelle’s front-and-center drum work is mildly reminiscent of Imagine Dragons, and her vocals often incite comparisons to Karen O, including this mildly ridiculous conversation that I had with Jenna at the show:

PretentiousPDX: “Yeah, but with just a top note of Gin Wigmore.”

That’s right: here are PretentiousPDX, we talk about music the same way oenophiles talk about wine. 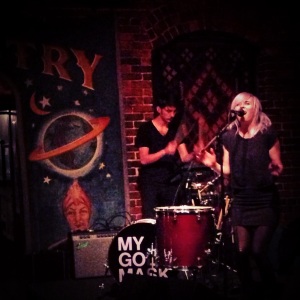 I was so impressed by these guys that I actually broke one of the Cardinal Rules of Hipster Concert Attendance – I actually bought merch from them. Specifically, I picked up a copy of their EP on vinyl, which much to my delight, included a stellar cover of Kim Karnes “Bette Davis Eyes.” Wanna see these guys in action? Check out this video of their song “Violet Eyes“: 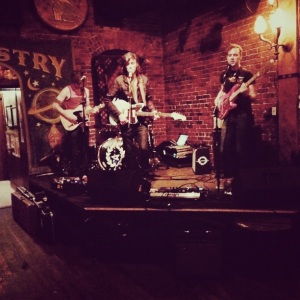 California Wives
Despite their West Coast-sounding name, this band also hails from The Windy City. I’ve wracked my brain trying to come up with something original to say about these guys, but it’s not the easiest task (although Paste Magazine has a pretty good review of their first album). California Wives has the same airy sound and breathless vocals that every band ever featured on The O.C. and Grey’s Anatomy had… they just do it much, much better.

I will say this, though: If I were young and in love, this is exactly the music I’d want to listen to, all the time. Which is pretty much one of the best compliments I can dole out to a band.

Watch them do their thing, here: