Let me break this down for you, Portland: Complaining about hearing cheesy Christmas music ad-infinitum during the holidays is a little like griping about how MTV doesn’t play music videos anymore or opining that cable news networks should report the news impartially – yes, I know all these things were true in your youth, but let’s face it: that ship has sailed, kids. So quit yer’ bitching and just be grateful that for the time being, we aren’t hearing Mariah Carey’s “All I Want For Christmas Is You” in September – cause mark my words, that day is coming. In the meantime, however, if the banality of the holiday music scene has got you down, allow me to lighten your burden with some good alternatives to listening “Jingle Bell Rock” for the eightieth time.

Now, this may come as surprise to some of you, but writing a super-hilarious blog and living the high life as one of Portland’s most eligible bachelors is not the only thing I do with my spare time (if you haven’t figured out that I’m perpetually tongue-in-cheek by this point, please do me a favor and DO NOT READ THIS BLOG). I also work as a volunteer for a local sacred music choir, Cantores in Ecclesia, and the affiliated William Byrd Festival – and as such, I’ve had the pleasure of meeting choristers from all over Christendom, many of them who come to Portland on the reg because of the artistic and choral community we have here in Oregon. (Or maybe it’s because we have good wine. I don’t know.) So, as a man with his finger on the pulse of the burgeoning Choral Arts Scene here in Portland, I’m here to give you three suggestions on how to GET ON MY LEVEL™ and enjoy some “high-brow” Christmas music, this season. Check it, Portland:

(Nota Bene: Most of these events feature traditional choral pieces from the last six centuries. If you want to hear Christmas music the way Elizabeth I might have heard it, this is your lucky day. If you’re just feeling churchy and want to hear “Go Tell It on the Mountain” accompanied by tambourine, you’d best look elsewhere.)

CANTORES IN ECCLESIA – Ave Maria: Music in Honor of the Blessed Virgin Mary 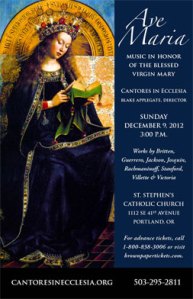 Sunday, 9 December 2012
So, because I’m shameless (and going in chronological order), allow me to start with a plug for “my” choir. Cantores in Ecclesia has been a Portland fixture for almost 30 years. Founded in 1983, Cantores has been a big force in rekindling interest in Gregorian Chant and sacred polyphony throughout the Portland area, both in religious and secular circles. You can hear Cantores sing for Mass every Saturday night at St. Stephen’s Catholic Church in Southeast Portland, but if going to Mass isn’t your cup of tea, this is your best opportunity to hear them in a sermon-free environment. Directed by Blake Applegate, Cantores will be performing their annual advent concert on Sunday, 9 December at St. Stephen’s. Highlights from their program include Josquin Desprez’s Benedicta es, caelorum regina, Charles Villiers Stanford’s Magnificat for double chorus, and a modern setting of the Salve Regina by English composer Gabriel Jackson. (If you don’t know who any of those people are, don’t worry. The music is still beautiful.)

THE CHOIRS OF JESUS COLLEGE, CAMBRIDGE – Journey into Light 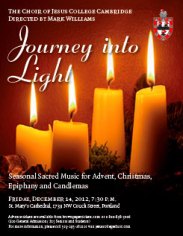 Friday, 14 December 2012
I’m not prone to lavish pronouncements, but to have Jesus College, Cambridge in the house is a pretty momentous occasion (I thought about naming this post “Straight Outta Cambridge,” but I doubt that many NWA fans read this blog). Haling from one of Cambridge University’s (yes, THAT Cambridge) oldest and most prestigious colleges, The Choirs of Jesus College, Cambridge will be gracing us with their presence on the weekend of 14-16 December as part of their West Coast tour to promote their new recording, Journey into Light. They will perform at a concert and two Masses over the course of the weekend, all under the skillful leadership of Mark Williams, Director of Chapel Music at Jesus College. In addition to his post at Jesus, Mark is a world-renowned organist (once heralded by Berliner-Zeitung as “the shooting star of the international organ scene”) and was the Principle Conductor at Portland’s 2012 William Byrd Festival. (Mark is also, as he is jokingly fond of reminding me, a man of excessive humility and great personal piety.)

At their concert on Friday, 14 December, The Choirs of Jesus College will be singing music for Advent, Christmas, Epiphany and Candelmas – which will presumably include pieces from their new album. The individual choirs will sing on Saturday and Sunday for Masses at St. Stephen’s Church and Holy Rosary Church, respectively. You would normally have to book a ticket to Heathrow hear these folks perform, so this is not an opportunity that you should miss!

IN MULIERIBUS – In Natali domni: Christmas in Bohemia

Friday, 21 December 2012
Rounding out this year’s holiday concert season is a performance by In Mulieribus (often referred to as IM – don’t worry, everyone has trouble pronouncing “Mulieribus”). Although they are relative newcomers compared to the other choirs on this list, IM has been enchanting Portland audiences for almost a decade under the direction of Anna Song. (Fun fact: Anna is married to Cantores director Blake Applegate, forming Portland’s Ultimate Choral Power Couple.) With their beautiful harmonies and almost ethereal sound, one might draw a comparison to Anonymous 4, but IM continues to innovate and inspire. This season’s concert will feature music from the Codex Specialnik and songs by Perotin and Dufay.

So there you have it, kids. Three choirs, three concerts. Sure, you could stay home and watch A Charlie Brown Christmas for the twentieth time, but I can guarantee you – it won’t bring you as close to the sublime as these three events will.